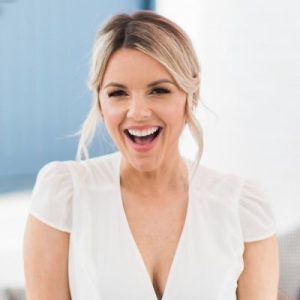 Alexandra Fedotowsky is an American television personality, correspondent, host, spokesperson and blogger. She was also a reality television contestant known from her appearances as a cast member on the ABC reality shows The Bachelor: On the Wings of Love and was the sixth Bachelorette . Fedotowsky was born in Massachusetts. She grew up in North Adams and Williamstown and is a graduate of Mount Greylock Regional High School. She attended the University of Massachusetts Amherst for two years prior to transferring to Clark University in Worcester, Massachusetts, where she graduated with a Bachelor of Arts in 2006. Fedotowsky’s work in television began when she was selected as a cast member on ABC’s reality show The Bachelor series which first aired on January 4, 2010. The show placed her with twenty-four other women all contending for the affection of pilot Jake Pavelka. She left the show when she was confronted with an ultimatum from her employer, Facebook, regarding the choice to return to work or to quit.