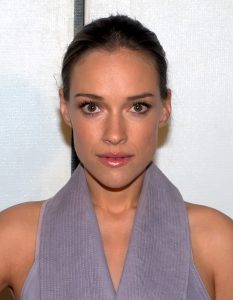 Alicja Bachleda-Curuś is a Polish actress and singer, who has appeared in films including Trade, Ondine and Pan Tadeusz. Bachleda-Curuś was born in Tampico, Mexico. She is the daughter of Lidia and Tadeusz Bachleda-Curuś, a geologist who was working in Mexico at that time. Her uncle is the former mayor of Zakopane, Poland, Adam Bachleda-Curuś. While growing up in Poland, Bachleda studied at the National Ballet Academy in Kraków and at the National Academy of Music's vocal department in Kraków . She studied acting at the Lee Strasberg Theatre and Film Institute in New York City. At age 15, Bachleda landed a lead role in the 1999 film Pan Tadeusz, directed by Academy Award-winning Polish director Andrzej Wajda. Four years later, she won a role in Polish soap opera Na dobre i na złe. Bachleda then began crossing over into mainstream films outside Poland, appearing in the German film Sommersturm, a coming of age story, in 2004. Bachleda-Curuś returned to Mexico to film the 2007 thriller Trade, starring Kevin Kline, an unflinching look at the world of human trafficking. Bachleda then returned to Europe to play a Jewish girl in the historical drama Der geköpfte Hahn, which took place during World War II in Transylvania, Romania. Her next film was 2009's Ondine, a film about an Irish fisherman who thinks he catches a selkie, a mythological seal/human.