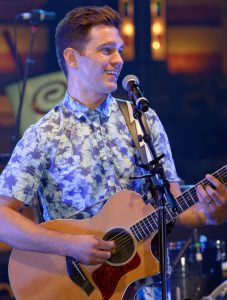 Andrew Charles “Andy” Grammer is an American singer, songwriter, and record producer. He is signed to S-Curve Records. His debut album, Andy Grammer, was released in 2011 and spawned the hit singles “Keep Your Head Up” and “Fine by Me”. His second album Magazines or Novels was released in 2014, with “Back Home” as the first single. The album’s second single, “Honey, I’m Good.”, is his most successful song to date, peaking at number 9 on the Billboard Hot 100. This single has been certified multi-platinum by the Recording Industry Association of America and was ranked one of the ten best-selling songs of 2015 by Nielsen SoundScan. Andrew Charles Grammer was born in Los Angeles, the son of Kathryn Willoughby and recording artist Robert Crane “Red” Grammer. He is of German and English descent. He grew up in Chester, New York, graduating from Monroe-Woodbury High School. As a child, he learned to play the trumpet and later the guitar and piano. He began writing songs at 15. At 20, he left Binghamton University in Vestal, New York, after unsuccessfully auditioning for the Binghamton Crosbys a cappella group and returned to Los Angeles, where he currently resides. In 2007, he graduated from the California State University, Northridge, with a B.A. in music industry studies.