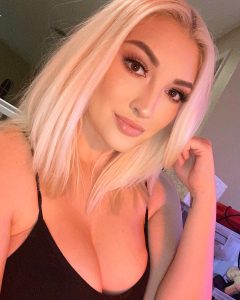 Anna Faith Carlson is an Instagram model and cosplayer from Florida. She is best known for impersonating the character of Queen Elsa from the Disney animated film Frozen. Carlson grew up with her sister Lexus Grace in Daytona Beach, Florida. Her parents are Jim and Karen Carlson. Her mother created the Elsa dress that she wears when performing. She has been publicly performing and modelling since she was in the second grade. She graduated high school in 2014. Her sister, Lexus Grace, portrays the other famous character from Frozen, Princess Anna. Faith became engaged to her long time boyfriend on July 30, 2017. She gained notable widespread media coverage in 2014 when she was discovered on Instagram as an Elsa look-alike. Carlson has been an extra in several films. Besides acting and modeling, Carlson plans to record an album. She was invited to attend a royal party in the United Arab Emirates. Carlson and her sister have appeared on radio stations, TV shows, and magazines. They have a fan base of over 1 million social media followers. She was named one of the top ten most popular cosplayers in the world.