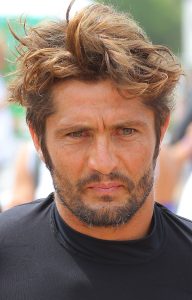 Bixente Lizarazu, initially registered as Vincent Lizarazu, is a retired Basque-French footballer who played for Bordeaux and Bayern Munich, among other teams, as a left-back. He also had 97 caps for the French national team. In a twelve-year international career from 1992 to 2004, Lizarazu played in three European championships and two World Cups for France, winning the 1998 World Cup and Euro 2000. An enthusiast in several sports from a young age, Lizarazu began his professional career with Girondins de Bordeaux, joining the club's youth setup as a 15-year-old in 1984 and initially playing as a winger. After being told he would not make a career from football due to his frail physicality as a teenager, he impressed the staff with his determination and became a member of the senior squad in 1988 alongside forward Christophe Dugarry. He was retrained to play as a counter-attacking left back at the suggestion of coach Didier Couécou and soon replaced the veteran Gernot Rohr in the position.