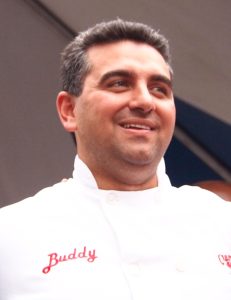 Bartolo “Buddy” Valastro Jr. is an American celebrity chef, entrepreneur, and reality television personality of Italian heritage. He is the owner of Carlo’s Bakery, as well as the face of Buddy V’s Ristorante. He is perhaps best known as the star of the reality television series Cake Boss, which premiered in April 2009. He has also starred in Kitchen Boss, The Next Great Baker, and Buddy’s Bakery Rescue . Surprisingly, Buddy Valastro did a cameo in the hit movie Bridesmaids, where he baked one cupcake in the kitchen baking scene only showing his hands. Valastro was born in Hoboken, New Jersey to Buddy Valastro, Sr., and Mary W. Tubito on March 3, 1977 and grew up in urban Hoboken and Little Ferry, New Jersey. His mother was born in Altamura, Italy and is herself the daughter of Italian-American immigrants who moved to New Jersey when she was six years old. Valastro grew up with 4 sisters; Grace, Mary, Maddalena and Lisa. Valastro began working at his family’s business, Carlo’s Bakery at age 11, alongside his father. Valastro’s father died when he was 17 in 1994, and he succeeded him as the new “Cake Boss.” Valastro’s mother died in June 2017, after a long battle of ALS.