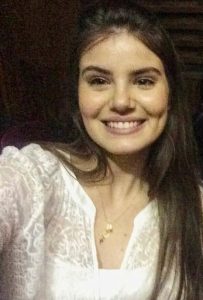 Camila Tavares de Queiroz is a Brazilian actress and model. She is best known for her role as Angel or Arlete Brito Gomes in the award-winning series Verdades Secretas, where she has earned numerous award for her performance as the character. Camila was born in Ribeirão Preto, São Paulo. From a humble family, her mother is a manicurist, and her father is a carpenter. Camila has two sisters, being the middle daughter. During the age of 14, she has been living alone in São Paulo, after winning the contest Pernambucanas Faces in the national phase and signed a contract with Ford Models. At the age of 16, she was living in Japan contracted by a local agency. At the age of 18, she moved to New York City continuing her modeling career, where she participated in international campaigns such as Armani Exchange brand. Camila lived in the United States for three years, until her 21 years old when she was called to do a test on Rede Globo to live as a model in the novel Walcyr Carrasco, Verdades Secretas where she plays as Angel or Arlete, a young naive girl that has the dream of being a rich and successful model, but ends up working in the world of luxury prostitution. Camila had never done any work as an actress, but received praise from the director and won numerous award for her performance as the protagonist of the novel. She has also debuted as a host of the special year-end CELEBRATES Brazil, alongside Márcio Garcia.