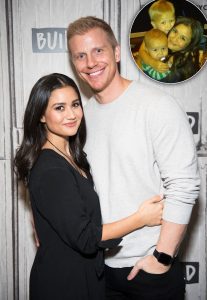 Catherine Ligaya Lowe, is an American graphic designer, reality television star, and the winner of the seventeenth season of ABC's The Bachelor. She is married to the former bachelor, Sean Lowe. On December 8, 2015, the Lowes announced they were expecting their first child. Their son was born on July 2, 2016. Giudici was born in Seattle, Washington to Carey and Cynthia Mejia-Giudici. She is of Filipino, Italian and Scottish heritage. She graduated from Roosevelt High School in 2004, and then from Washington State University in the class of 2008, having gained a B.A. in advertising. During this time, she dated noted Seattle rapper and recognized King of Ballard, Grynch. She then began a career in advertising, working for Seattle’s Wexley School for Girls. "Sean and Catherine's Wedding" Over a year after proposing to Giudici on his season of The Bachelor, Sean Lowe and his fiancée were finally married on January 26, 2014, in a live ceremony performed by Lowe's father at the Four Seasons Resort Biltmore in Santa Barbara. Many of the Bachelor alumni were in attendance at the wedding, such as The Bachelorette’s married couples Ashley and J.P. Rosenbaum, Trista and Ryan Sutter, DeAnna and Stephen Stagliano, The Bachelor's Jason and Molly Mesnick as well as the previous season's Bachelorette pair, Desiree Hartsock and Chris Siegfried, who have since also gotten married.