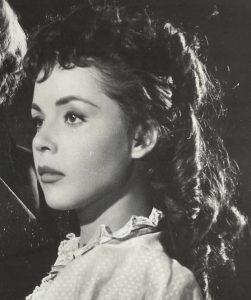 Colleen Miller is an American actress. She starred in several films, such as the Westerns Gunfight at Comanche Creek and Four Guns to the Border . Miller was born in Yakima, Washington, and raised in Portland, Oregon. Miller graduated from high school in Portland at age fifteen. After graduating, she worked as a professional dancer in a San Francisco ballet company, and relocated to Las Vegas after three seasons to work at the Flamingo. While dancing in Las Vegas, Miller was spotted by a talent agent who signed her to a contract with Howard Hughes for his RKO Pictures company. She was 19 when she made her first film appearance in The Las Vegas Story, starring Jane Russell. She shared top billing with Rory Calhoun in her next film, a western titled Four Guns to the Border, which co-starred Nina Foch. She then had a leading role in Playgirl as a young Midwestern girl who comes to New York City to be a model and ends up involved in a shooting and a scandal. She then was signed by Universal Pictures, where she co-starred with Tony Curtis in two films, The Purple Mask and The Rawhide Years.