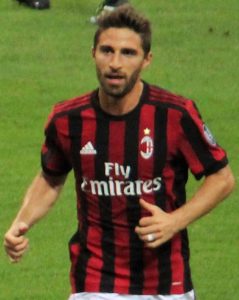 Fabio Borini is an Italian footballer who plays as a forward for Milan on loan from Sunderland. He started his career at Bologna, before moving to Chelsea in 2007. In 2011, Borini joined Championship side Swansea City on loan, and eventually signed for Roma, before moving to Liverpool in 2012. He spent the 2013–14 season on loan at Sunderland, and after a season back at Liverpool he joined Sunderland permanently in August 2015. Borini made his senior international debut in 2012, and was an unused member of the Italian squad that reached the Euro 2012 final. Borini first started playing football at the age of nine and was raised supporting the local club Bologna. He joined Bologna in 2001, as a youth player.