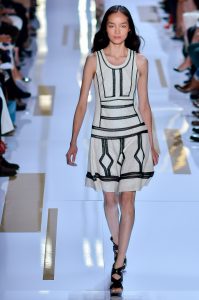 Sun Feifei, commonly known as Fei Fei Sun, is a Chinese model based in New York City. She is ranked as the New Supers by models.com. Top casting director Ashley Brokaw proclaimed Fei Fei as “an exceptional beauty.” . She is the face of cosmetic giant Estée Lauder. Sun was born in Weifang, Shandong, China. She was scouted and briefly trained to model as a teenager, but did not start modeling professionally until she graduated from high school. Sun attended Suzhou University, majoring in fashion design. Sun started her modeling career in 2008 when she represented China in Elite Model Look, one of the world’s most influential modeling contests. She won the championship in China and eventually won the third prize internationally. She made her international runway debut during London Fashion Week in February 2010, walking for Christopher Kane. In December 2009, she was handpicked by Karl Lagerfeld to walk Chanel’s Paris-Shanghai fashion show. Since then, Sun has appeared on the runway of Jil Sander, Dries Van Noten, Céline, Hermès, Miu Miu, Prada, Valentino, Christian Dior and many others.