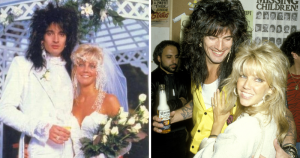 She made her first screen appearances in the early 1980s with small roles in episodes of ‘CHiPs’, ‘240-Robert’, and ‘Eight Is Enough’. In 1981, she appeared in the TV movie ‘The Return of the Beverly Hillbillies’. In the same year, she also appeared in ‘Twirl’. She also appeared in are ‘Too Close to Home’, ‘Fresh Off the Boat’, ‘The Game of Love’, ‘Franklin & Bash’, ‘Scary Movie 5’, ‘Hot in Cleveland’, ‘The Assistants’, ‘He Loves Me’, ‘Melrose Place’, ‘See Jayne Run’, ‘Boston Legal’, ‘Two and a Half Men’, ‘Scrubs’ and ‘The Drew Carey Show’ among others.

She is best known for her role as Amanda Woodward on Melrose Place (1993–99), for which she received four consecutive Golden Globe nominations for Best Actress – Television Series Drama. Her other notable television roles include Sammy Jo Carrington on Dynasty (1981–89), Officer Stacy Sheridan on T.J. Hooker (1982–86), and Caitlin Moore on Spin City (1999–2002), for which she earned a further two Golden Globe nominations for Best Actress – Television Series Musical or Comedy. She had a recurring role on the TV Land sitcom Hot in Cleveland and a main role on the TNT drama-comedy television series Franklin & Bash in 2013.

In 2016, Locklear appeared in the television movie The Game of Love which aired on UP on May 15, 2016. Later in 2016, it was revealed that Locklear would be guest-starring in a recurring role in Tyler Perry's drama, Too Close to Home on TLC.

Locklear won the Bravo Otto Germany Award in 1983. Additionally, she has garnered the Golden Globe Award nominations a total of six times. Now she ranked in the list of most popular American actress.