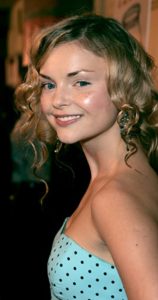 Izabella Anna Mikołajczak, better known as Izabella Miko, is a Polish actress, dancer, producer, and environmental activist. While a dance student in Poland, Miko was recruited to study at the New York City Ballet at age fifteen and later studied acting at the Lee Strasberg Institute. She made her American film debut in Coyote Ugly, followed by a starring part in the vampire thriller The Forsaken . Miko has also had recurring roles on the television series Deadwood, The Cape, and Chicago Fire, in addition to roles in dance films such as Save the Last Dance 2, Make Your Move, and Step Up: All In . She made her debut as a film producer on the British biographical drama Desert Dancer in 2014. Miko was born Izabella Anna Mikołajczak in Łódź, Poland, the daughter of actors Grażyna Dyląg and Aleksander Mikołajczak. She grew up in Warsaw, where she studied to be a ballerina at the Chopin Music School. An American choreographer invited her to study in New York City on a scholarship with the School of American Ballet, and she later enrolled at the Lee Strasberg Institute to study acting. After sustaining a back injury, Miko left New York City and returned to Poland.