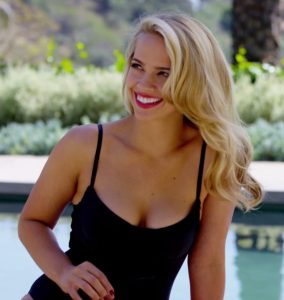 Jessica Barth is an American stage and film actress, known for portraying Tami-Lynn McCaferty in the film Ted and its sequel. Barth was born in Philadelphia. After high school, she took classes at the Wilma Theater, and later attended La Salle University, where she studied communications for two years; she later earned a bachelor of arts at West Chester University, where she studied acting theater and creative writing. Barth built up her résumé while also working at three different restaurants in Los Angeles. She began her acting career with theater plays, with her first television role on The District in 2004 and her first film role in Neo Ned in 2005. Barth earned worldwide recognition with her appearance in Seth MacFarlane's 2012 film Ted as Tami-Lynn, the title character's love interest. She reprised the role in Ted 2 . In 2017, Barth revealed that she was a victim of sexual harassment from Harvey Weinstein. She met with Weinstein in her hotel room as he "alternated between offering to cast her in a film and demanding a naked massage in bed.” MacFarlane, who knew Barth from their work on the Ted movies, stated his support for her allegations in a statement on Twitter.