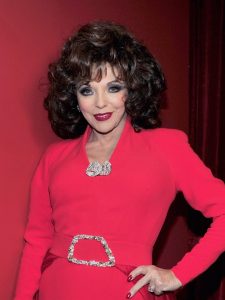 Dame Joan Henrietta Collins, DBE is an English actress, author and columnist. Born in London, Collins grew up during the Second World War. After making her stage debut in the Henrik Ibsen play A Doll’s House at the age of nine, she trained as an actress at the Royal Academy of Dramatic Art in London. She then signed an exclusive contract with the Rank Organisation and appeared in various British films. At age 22 in 1955, Collins headed to Hollywood and landed sultry roles in several popular films, including The Girl in the Red Velvet Swing and Rally Round the Flag, Boys! . While she continued to make films in the US and the UK throughout the 1960s, she also guest-starred in an episode of Star Trek in 1967 named “The City on the Edge of Forever”, as Edith Keeler. Her career languished in the 1970s, when she appeared in a number of horror films. Near the end of the decade, she starred in two softcore pornographic films based on best-selling novels by her younger sister Jackie Collins: The Stud and its sequel The Bitch .