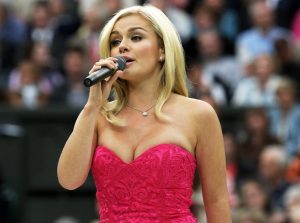 Well, the highlight of my night has to be this… singing with the amazing children of the @griefencounter choir (These children have each lost a parent or a sibling and the choir was formed to help them get over their bereavement). You all took a little piece of my heart tonight – well done! You had the whole Palladium on their feet! 😘💙#guidinglighttour Photo Credit: Matt Thorpe Photography

She and her sister Laura were raised by their parents Selwyn John and Susan. She attended Neath’s Dwr Y Felin Comprehensive School from where she proceeded to Gorseinon College. When she was 15, she lost her father to lung cancer while her mother worked as a mammographer with Breast Test Wales. At the age of 17 she won a scholarship to study at the Royal Academy of Music, graduating with honours and receiving a music teacher's diploma.

From the time she was 11, she was a member of the Royal School of Church Music Cathedral Singers. By 1996, she had passed the St. Cecilia Award which was the highest RSCM award she could get. The singer, who would later become one of Britain’s most loved artists, went on to win the BBC Radio 2 Welsh Choirgirl of the Year contest twice, as well as the BET Welsh Choirgirl of the Year competition. With a number of other awards to her name, she went to the Royal Academy of Music on scholarship and graduated with honors.

After working as a freelance voice coach, a tour guide on the London Eye and as a model, she entered a modelling competition and became the Face of Wales 2000. She then decided to follow a musical career. Universal Classics and Jazz heard her demo and she was invited to an interview where she sang Rossini's "Una voce poco fa". Universal offered Jenkins a six-album deal, the most lucrative in the United Kingdom's classical recording history, reportedly worth £1 million.

Her singing career was launched by her demo cover of "Una voce poco fa. She was paired with Mark Ballas on the fourteenth season of Dancing with the Stars. She is popular for Welsh classical crossover singer well known for her distinctive mezzo-soprano voice. She competed on Dancing with the Stars in 2012, finishing in second place.

After winning singing competitions in her youth, Jenkins studied at the Royal Academy of Music, modelled and taught voice. She came to wide public attention in 2003 when she sang at Westminster Cathedral in honour of Pope John Paul II's silver jubilee. Since 2004, she has released numerous albums that have performed well on British and foreign charts. In both 2005 and 2006, her albums received Classic Brit Awards as Album of the Year. She has also been seen widely in concert, including performing for British troops in Iraq and Afghanistan. She has also sung at sporting events, on television shows and in support of many charities. In 2012, she competed on the U.S. television show Dancing with the Stars, finishing in second place, behind NFL Super Bowl champion Donald Driver.

While she was studying at the Royal Academy of Music, she was attacked and nearly raped by a man who followed her off a bus after she had enjoyed a night out with friends. When she was walking back to her London home, he sprang upon her and tried to drag her into an alley, but she managed to escape. He continued to pursue her and punched her to the ground, prompting her to curl up into a ball so that he was not able to rape her. After repeatedly kicking her, he eventually left with her wallet and has never been caught. When discussing the incident, she said "It was just awful. I was so shaken up. It took me a long time to get over it, and my mum was devastated. I genuinely believe I was very lucky".

While chatting with TV presenter and magician Stephen Mulhern at a post-awards show party, she mentioned to him that she'd always had an ambition to have a go at being sawed in half by a magician. This led to Mulhern inviting her to appear on his Saturday Night phone-in game show Magic Numbers (2010), where she acted as his assistant in a performance of Sawing a Woman in Half in which Mulhern and singer Olly Murs sawed her in half inside a see-through box. In April 2017, Jenkins appeared on Operation: Magic, a one-off magic show on ITV1, acting as the assistant to magician and Britain's Got Talent winner Richard Jones.

She married Andrew Levitas in 2014. They have a daughter named Aaliyah and a son named Xander. She previously dated TV presenter Gethin Jones.