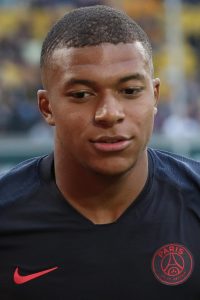 Kylian Mbappe is a professional footballer playing forward for the team, Paris Saint-Germain after transfer from Monaco on loan. He is the second most expensive player in the world after Neymar Jr. His fee is estimated to be €180 million. He made an international debut for his country in March 2017 and is playing for the 2018 FIFA Worldcup.

Kylian Mbappe was born under the birth sign Sagittarius as Kylian Mbappe Lottin on 20th December 1998 in Paris, France to his mother Fayza Lamari and father Wilfried Mbappe. He has two brothers: Adeyemi Mbappe and Jires Kembo Ekoko, a professional football player. His mother is an Algerian and his Father is a football coach. Mbappe belongs to French nationality and Afro-European ethnicity. The other detailed records of his childhood are currently unavailable.

Kylian Mbappe developed his career at AS Bondy in the sector of football. He had been trained by his father initially. Then they moved forward to the area where several French clubs, and Spanish clubs Real Madrid and Valencia attempted to choose him after being impressed by his performance in the so-called Clairefontaine academy. He joined Chelsea, English Club for a trial playing against Charlton at the age of 11. Mbappe then developed his professional career with the Monaco or Association Sportive de Monaco Football Club also known as Monaco and Monegasque football club. On 2nd December 2015, he made his club debut in Ligue 1 against SM Caen. He broke Thierry Henry’s record of being a young football player. On 20th February 2016, he scored his first goal in a home Ligue 13-1 win over Troyes. Therefore, he was able to be the youngest first-team goal scorer in the history of the team. He was capable of scoring his first hat-trick in the Coupe de la Ligue round of 16 at the Stade Louis II on 14th December 2014. He was able to become the second-youngest French scorer in UEFA Champions League history since Karim Benzema scoring the team’s second goal in 2005. He then went to Paris Saint-Germain (PSG) on a loan after playing two seasons with the club. On 31st August 2017, Paris Saint-Germain signed and contracted Mbappe from Monaco on loan. He got transferred for $177.34 million along with extra $42.81 million add-ons which made him the second most expensive player after Neymar. On 8th September in 2017, he scored his first goal in a 5-1 Ligue 1 win over Metz for PSG. He had made his first European goal for Les Parisiensdefeating Celtic 5-0 in the UEFA Champions League group stage. Mbappe representing his national team in several tournaments had won the 2016 UEFA European Under-19 Championships contributing five goals along with his team. On 31st August 2017, he had scored his first senior international goal in a 2018 World Cup qualification against the Netherlands. Mbappe has scored 3 international goals as of April 2018. So far he has been playing in 12 international games.

Kylian Mbappe Net worth And Salary

As of 2021, the estimated Kylian Mbappé’s net worth is $148 million USD. His net worth consists of earnings from post sponsorships and brand endorsements. Mbappé’s salary as of 2021 is $17.6 million per year.