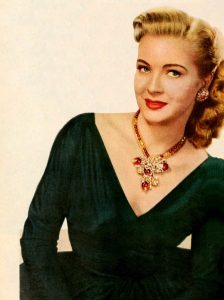 Lori Nelson is an American actress and former model. Born Dixie Kay Nelson in Santa Fe, New Mexico, Nelson is the daughter of Mr. and Mrs. R.A. Nelson. She is the great-grandniece of John J. Pershing. She began her career at the age of 2 appearing in local theater productions. When Nelson was 4 years old, her family moved to Encino, California. At the age of 5, she won the title of “Little Miss America”. During her childhood, she toured veteran’s hospitals entertaining patients, acted in productions of little theaters, and modeled for photographers. At age 7, Nelson contracted rheumatic fever which left her bedridden for four years. After she recovered, she returned to pageants and won the title of Miss Encino at age 17. After graduating from Canoga Park High School, Nelson worked as a model. In 1950, she was signed to a 7-year contract with Universal-International after a studio scout saw her performing in a little theater production. She made her film debut in the 1952 Western Bend of the River. Later that year, she appeared as “Rosie Kettle” in the comedy film Ma and Pa Kettle at the Fair, followed by a supporting role in Francis Goes to West Point. In 1955, Nelson guest starred in two episodes of It’s a Great Life, and reprised her role as “Rosie Kettle” in Ma and Pa Kettle at Waikiki. That same year, she co-starred in the Creature From the Black Lagoon sequel Revenge of the Creature.