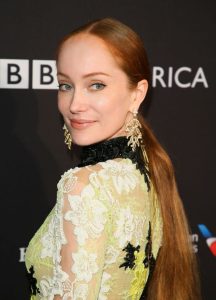 Lotte Verbeek is a Dutch actress, dancer and model. She is best known for her role as Giulia Farnese in The Borgias television series created by Neil Jordan, and as Geillis Duncan in the Starz series Outlander. Verbeek was born in Venlo, Netherlands. She was educated at Gymnasium Collegium Marianum in Venlo and graduated in 2008 at the Theaterschool in Amsterdam. From 1999, Verbeek attended the Dance Academy in Arnhem and the Amsterdam Academy of Jazz/Musical Theatre and Dance, where she graduated in 2006. She received singing lessons and attended voice workshops. During her studies, she worked as a dancer and model for photographer Erwin Olaf. After completing high school, Verbeek started her acting career performing lead roles in Dutch movies such as Moes and LEFT, in which she plays five double roles. In 2009 she won the Leopard for best actress at the Locarno International Film Festival for her role of Anne in Nothing Personal, a Dutch movie directed by Urszula Antoniak. For the same part she was also the recipient of the best actress award at the International Film Festival of Marrakech 2009 and was nominated as best actress for the Golden Calf at the Netherlands Film Festival.