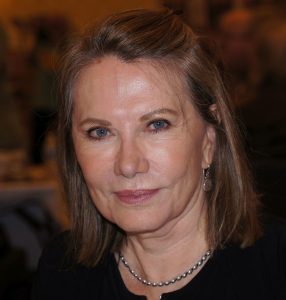 Maud Solveig Christina Adams, is a Swedish actress, known for her roles as two different Bond girls, first in The Man with the Golden Gun and then as the eponymous character in Octopussy, as well as making a brief uncredited appearance in A View to a Kill . Adams was born Maud Solveig Christina Wikström in Luleå, Sweden, the daughter of Thyra, a government tax inspector, and Gustav Wikström, a comptroller. She had once wanted to work as an interpreter as she is fluent in five languages. She was discovered in 1963 in a shop by a photographer who asked to take her picture, a picture he submitted to the Miss Sweden contest arranged by the magazine Allers; from there her modeling career took off. Adams moved to Paris and later to New York City to work for Eileen Ford. At this time she was one of the highest paid and most exposed models in the world. Her acting career started when she was asked to appear in the 1970 movie The Boys in the Band, in which she played a photo-shoot model in the opening credits. In the 1970s, she guest-starred in such American TV series as Hawaii Five-O and Kojak.