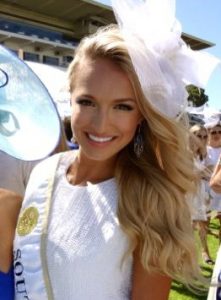 Melinda Bam is a South African director, model and beauty pageant titleholder who was crowned Miss South Africa 2011, becoming the official representative of her country to Miss Universe 2012. She has a swimwear line called Bambshell, for which she worked with South African swimwear brand Dax Martin. Melinda Bam was raised in Pretoria. She was born in 1989 and has one sister, Melissa. She is a model and a student of B.Com Marketing from the University of Pretoria. She entered Miss South Africa 2011 and won the pageant on her first attempt. She was crowned Miss South Africa 2011 at an event held at the Sun City Super Bowl on 11 December 2011. Melinda Bam represented South Africa in December at Miss Universe 2012, which was held in Las Vegas, and placed among the top 10. She did not participate in the Miss World 2012 pageant because if a contestant reaches the top three of the pageant she is not permitted to enter Miss Universe. The 1st princess Remona Moodley represented South Africa at Miss World 2012 instead.