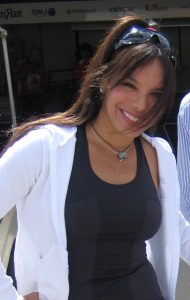 On March 23, 2007, Duno and her Grand Am Series team, SAMAX Motorsport, sponsored by CITGO, announced that they acquired the equipment to run a 10 race IndyCar series schedule in 2007, including the Indianapolis 500. It was also announced that Duno will no longer run a full schedule in the Grand Am series. On April 26, 2007, Duno successfully passed her IRL rookie test at Kansas Speedway. When Duno made the field for the Kansas Lottery Indy 300 on April 29, 2007, it marked the first time in North American open wheel history that three women ran in the same race. Duno stayed out of trouble after qualifying last in the 21-car field and finished 14th. On May 6, 2007, Duno successfully completed her rookie test for the Indianapolis 500 race. This 91st running of the “Indy 500” was the first where three women were included in the 33-car field. Duno qualified on May 19, and her speed held through Bump Day. Duno was one of two rookie drivers competing in the Race. She crashed out of the race on lap 65 and finished 31st.