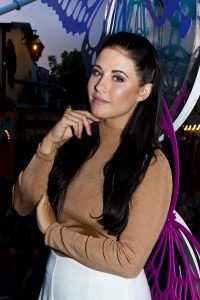 Molly Sandén is a Swedish pop singer and voice actress. As a teenager she represented Sweden in the Junior Eurovision Song Contest in 2006, and participated in Melodifestivalen in 2009, and as a young adult in 2012 and 2016. Her sisters Frida and Mimmi are also singers. Sandén was born in Stockholm on 3 July 1992. She attended the Adolf Fredrik's Music School. She then attended the gymnasium school Rytmus Music High School, from which she graduated in spring 2011. Sandén practised and wrote music at Helges song studio in Gävle, where she also became a member of the band Helges All Stars with Alice Svensson, Amy Diamond, Zara Larsson, and her sisters Frida and Mimmi. Sandén represented Sweden at the Junior Eurovision Song Contest in 2006, singing "Det finaste någon kan få". She came third, which remains Sweden's best result. She appeared in SVT's New Years' celebrations on 31 December 2006, which was broadcast live from Skansen. She also won the talent competition, Stellar Shots. She performed a duet with Magnus Carlsson in the song "Julens tid är här", on his Christmas album Spår i snön in 2006.