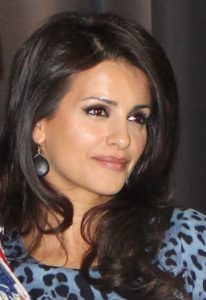 Mónica Cruz Sánchez is a Spanish actress and dancer. She is the younger sister of actress Penélope Cruz. Cruz was born in the working-class town of Alcobendas, Madrid, Spain, the daughter of Encarna Sánchez, a hairdresser, and Eduardo Cruz, a retailer and auto mechanic. Throughout her childhood, she lived in Alcobendas. She is the middle child of three; older sister Penélope is an actress, and younger brother Eduardo is a singer. Her parents divorced in 1999, and her father remarried Carmen Moreno in 2003. Moreno gave birth to a girl, Salma Cruz, on 24 February 2012. Penélope and Mónica distinguished themselves as promising young dancers and both received professional instruction; Penélope attended Spain’s National Conservatory while Mónica enrolled in The Royal Academy of Dance to study traditional ballet and flamenco. Upon graduating from the academy, Cruz joined Joaquín Cortés’ flamenco dance company. She stayed with the company for seven years until, in 2002, she left dancing to pursue a career as an actress. In 2005, she starred in the Spanish television show Un Paso Adelante alongside Beatriz Luengo, Miguel Ángel Muñoz, Pablo Puyol and Silvia Marty.