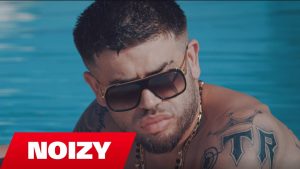 Rigels Rajku known by his stage name Noizy or Zini Zin, is an Albanian singer, rapper, songwriter, record producer and actor. Noizy rose to fame when he released his first album in 2009. He is arguably the most popular rapper in the Albanian speaking territories. Rigels Rajku was born on 27 September 1986 in Sukth, Durres, Albania. At the age of 11, Noizy among his family moved in London, capital city of England, United Kingdom from where he grew up in Woolwich. Inspired by the way of daily life in the past that made him more hungry to succeed in career & family. During his time in London, he developed a passion for fighting and eventually took up street fighting where he was undefeated. Noizy debuted in the music industry on 20 December 2004 with the song On Top of the Rest which he performed live in a music competition Top Fest organised by Top Channel. In 2009 he released his first album Pak Më Ndryshe . It took almost 1 full year to be released in very professional way, recorded and mixed by British engineering Tom "On the Mix" Gillieron, GBMC and Noizy himself. In 2010 Noizy launched a mixtape called Most Wanted Mixtape. He is known for his friendship because he has many known friends as Blerim Destani, MC Kresha and more. Noizy is also a champion in street battles "Street Fight" where he was declared champion of London in 15 games & 15 wins.