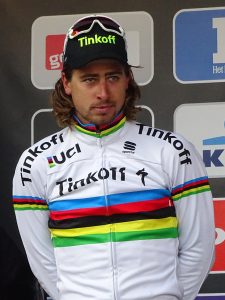 Peter Sagan is a Slovak professional road bicycle racer for UCI WorldTeam Bora–Hansgrohe. Sagan had a successful junior cyclo-cross and mountain bike racing career, winning the Junior Mountain Bike World Championship in 2008, before moving to road racing. Sagan is considered one of cycling’s greatest talents, having earned many prestigious victories, including three consecutive World Championships, one European Championship, two Paris–Nice stages, seven Tirreno–Adriatico stages, one in the Tour de Romandie, three and the overall classification in the Tour de Pologne, a record sixteen stages and the overall in the Tour of California, and another fifteen in the Tour de Suisse. He has won a number of classics, including the Monument races Paris-Roubaix and Tour of Flanders, three Gent–Wevelgem races and E3 Harelbeke, together with twelve stages in Grand Tours: four in the Vuelta a España and eight in the Tour de France. He was also the winner of the points classification in the Tour de France, in 2012, 2013, 2014, 2015 and 2016; as a result, Sagan became the first rider to win the classification in all of his first five attempts and is one win behind the record of six of Erik Zabel.