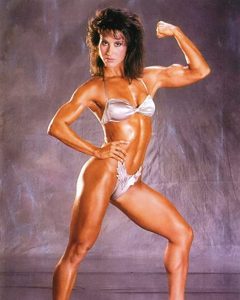 Rachel Livia Elizondo McLish is an American female bodybuilding champion, actress, and author. McLish was born as Raquel Livia Elizondo in 1955 in Harlingen, Texas, the second-youngest daughter born. Her father Rafael was of Mexican ancestry and her mother is named Raquel Elizondo. She attended the Harlingen High School, where she was a cheerleader and twice-named Cardinal’s Football Sweetheart. She graduated from high school in 1973. In 1978, she graduated from the University of Texas-Pan American with a degree in physiology and health and nutrition. While attending college, McLish worked at a health club in McAllen, Texas. When she graduated college, she and the manager of the health club she worked at formed a partnership and founded the Sport Palace Association in Harlingen. With the success of the Sport Palace Association, she opened two more facilities in Corpus Christi and Brownsville in 1980. She was inspired to compete in bodybuilding thanks to Lisa Lyon and the men’s club manager, Javier Gutierrez, who would show her magazines of female bodybuilders and encouraged her to compete. She decided to compete because the opening of her new health club would coincide with a women’s bodybuilding contest and bodybuilding would give her a platform to promote fitness to women.