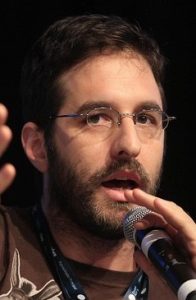 Rafael Bastos Hocsman, better known as Rafinha Bastos is a Brazilian comedian, actor, journalist and television personality. Rafinha Bastos was a former host of “CQC” a popular TV show in Brazil. Since May 2010, he also hosts another TV show, “A Liga”, which is broadcast by Band TV channel. In 2010, Bastos, together with comedian Danilo Gentili and producer Italo Gusso, opened a comedy club in Brazil, in the city of São Paulo. In 2011, Rafinha became worldwide famous after the New York Times elected him the world’s most influential person on Twitter. In CQC’s September 19, 2011 live broadcast, Bastos made an allegedly dark humor joke about singer Wanessa; when Marcelo Tas, the show’s main host, remarked how beautiful the singer looked pregnant, Bastos replied: “Muito. Comeria ela e o bebê.” . The joke caused controversy among audiences and was taken with severe criticism. Following the next broadcast on September 26, Bastos was suspended from the show. He was rumoured to have asked his resignation on his contract, but the fact was not confirmed. On October 13, Wanessa and her husband Marcus Buaiz sued Bastos for R$100,000 claiming personal injury.