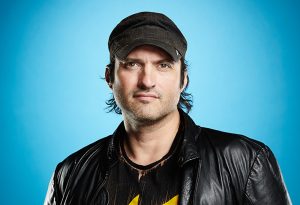 Robert Rodriguez is one of the most famous and trending Film Director, Producer and Screen writer in whole world right now. Robert Rodriguez was born on June 20, 1968 in San Antonio, Texas, USA. He was born as Robert Anthony Rodriguez, but best known as Robert Rodriguez. He is the son of Mexican parents Rebecca a nurse, and Cecilio G. Rodríguez, a salesman.

He attend St. Anthony High School Seminary in San Antonio and graduate from University of Texas at Austin.

In high school, he met Carlos Gallardo; they both shot films on video throughout high school and college. The short film "Bedhead" attracted enough attention to encourage him to seriously attempt a career as a filmmaker. He went on to shoot the action flick El Mariachi (1992) in Spanish; he shot it for around $7,000 with money raised by his friend Adrian Kano and from payments for his own participation in medical testing studie. Intended for the Spanish-language low-budget home-video market, the film was "cleaned up" by Columbia Pictures with post-production work costing several hundred thousand dollars before it was distributed in the United States. Its promotion still advertised it as "the movie made for $7,000". Rodríguez described his experiences making the film in his book Rebel Without a Crew (1995).

He directed From Dusk till Dawn in 1996 and developed its television adaptation series . In 2001, Rodríguez enjoyed his first Hollywood hit with Spy Kids, which went on to become a movie franchise. A third "mariachi" film also appeared in late 2003, Once Upon a Time in Mexico, which completed the Mexico Trilogy (also called the Mariachi Trilogy). He operates a production company called Troublemaker Studios, formerly Los Hooligans Productions. He co-directed the 2005 neo-noir crime thriller anthology Sin City and the 2014 sequel, Sin City: A Dame to Kill For. Rodriguez also directed the Spy Kids films, The Faculty, as well as The Adventures of Sharkboy and Lavagirl in 3-D, Planet Terror, and Machete.

In 2007, he directed the double feature film Grindhouse with Quentin Tarantino. In 2011, Rodríguez announced at Comic-Con that he had purchased the film rights to Heavy Metal and planned to develop a new animated film at the new Quick Draw Studios. In 2015 it was announced that he directed the art film 100 Years, which is due to be released in 2115. In March 2017, it was announced that Rodriguez would direct Escape from New York, a remake of the dystopian sci-fi action film with original director John Carpenter producing.

His adult-oriented movies always feature a fictional brand of beer called "Cerveza Chango". Chango is the Orisha (a deity as in the Afro-Cuban religion of Santeria - an amalgam of African tradition and Catholicism) of fire, lightning and dance. Chango is renowned for the way he avenges crimes against the innocent, a recurring theme in Rodriguez movies in which the fictional beer appears.

He is a friend and frequent collaborator of filmmaker Quentin Tarantino, who founded the production company A Band Apart, which Rodriguez was a member of. In December 2013, Rodriguez launched his own cable television channel, El Rey.

He was married to Elizabeth Avellan from 1990 to 2006 and he dated actress Rose McGowan from 2007 to 2009. He has five children named Rebel, Rhiannon, Racer, Rogue and Rocket.

He won the Audience Award for El Mariachi (1992), film at the Sundance Film Festival in 1993. Now he ranked in the list of most popular American filmmaker, screenwriter and producer.