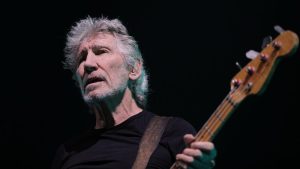 Good to see my old friend. Well, not that old….he’s 6 months younger than me! 📷: @kate.izor

Roger Waters is one of the most famous and trending Singer-Songwriter in whole world right now. Roger Waters was born on September 6, 1943 in Great Bookham, Surrey, England. He was born as George Roger Waters, but best known as Roger Waters.

He is the son of Eric Fletcher Waters(father) and Mary(mother). His father, the son of a coal miner and Labour Party activist, was a schoolteacher, a devout Christian, and a Communist Party member. In the early years of the Second World War, Waters' father was a conscientious objector who drove an ambulance during the Blitz.

He went to Morley Memorial Junior School in Cambridge and has completed his high school studies from Cambridgeshire High School for Boys. Next he attended the University of Westminster.

He was the chairman of the Cambridge Youth Campaign for Nuclear Disarmament at age fifteen.

In 1965, he co-founded the progressive rock band Pink Floyd. Waters initially served solely as the bassist, but following the departure of songwriter Syd Barrett in 1968, he also became their lyricist, co-lead vocalist, and conceptual leader. Pink Floyd achieved international success with the concept albums The Dark Side of the Moon (1973), Wish You Were Here (1975), Animals (1977), and The Wall (1979). By the early 1980s, they had become one of the most critically acclaimed and commercially successful groups in popular music; by 2013, they had sold more than 250 million albums worldwide. Amid creative differences, Waters left in 1985 and began a legal dispute with the remaining members over the use of the band's name and material. They settled out of court in 1987.

Waters' solo work includes the studio albums The Pros and Cons of Hitch Hiking (1984), Radio K.A.O.S. (1987), Amused to Death (1992), and Is This the Life We Really Want? (2017). In 2005, he released Ça Ira, an opera translated from Étienne and Nadine Roda-Gils' libretto about the French Revolution. In 1990, Waters staged one of the largest rock concerts in history, The Wall – Live in Berlin, with an attendance of 450,000. As a member of Pink Floyd, he was inducted into the U.S. Rock and Roll Hall of Fame in 1996 and the UK Music Hall of Fame in 2005. Later that year, he reunited with Pink Floyd bandmates Mason, Wright and David Gilmour for the Live 8 global awareness event, the group's first appearance with Waters since 1981. He has toured extensively as a solo act since 1999; he performed The Dark Side of the Moon in its entirety for his world tour of 2006–2008, and in 2010 began the Wall Live tour, the highest-grossing of all time by a solo artist.

On 3 May 2016, he was announced as one of the headline performers at the Desert Trip music festival and performed twice on 9 and 16 October 2016. He released his first solo album in nearly 25 years, Is This the Life We Really Want?, on 2 June 2017. It was produced by Radiohead producer Nigel Godrich; Godrich was critical of Waters' earlier solo work, and encouraged him to make a concise album showcasing his lyrics. In 2018, Waters narrated an adaptation of Igor Stravinsky's theatrical work The Soldier's Tale recorded with the Bridgehampton Chamber Music Festival. It was released on 26 October via Sony Classical Masterworks.

He married Judy Trim, his childhood sweetheart in 1969. She was a successful potter who had featured on the gatefold sleeve of the original release of Ummagumma, but excised from subsequent CD reissues. The couple however, divorced in 1975 and had no children. Trim passed on in 2001. In 1976, Waters married again, this time to Lady Carolyne Christie, the niece of the 3rd Marquess of Zetland: Lawrence Aldred Mervyn Dundas. The two divorced in 1992 and have two children together. His son Harry Waters is a musician who has been playing keyboards with his father’s touring band since 2002, while his daughter, India Waters has worked as a model.

In 1993, he married Priscilla Phillips with whom he has one son, Jack Fletcher. Their marriage also ended in 2001. He became engaged to Laurie Durning, an actress and filmmaker. The pair got married on 14th January 2012 and filed for divorce in September 2015.