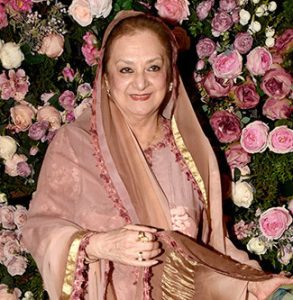 Saira Banu, also known as Saira Bano, is an Indian Hindi film actress and the wife of the film actor Dilip Kumar. She acted in many Bollywood films between 1961 and 1988. Saira Banu was born in India to actress Naseem Banu and film producer Mian Ehsan-ul-Haq, who produced the film Phool in Mumbai and film Wadah in Pakistan. Her maternal grandmother was the courtesan Chamiyan Bai, also known as Shamshad Begum of Delhi . Her niece is former actress Shaheen Banu who is the daughter of her brother Sultan. Saira spent a significant part of her childhood in London, and went to finishing school. Her maternal grandmother was from Hasanpur . Her paternal grandfather, Muhammad Suleman, was an architect who served as the Chief Engineer of New Delhi and was later involved in the construction of Jinnah’s Mazar in Karachi. Her paternal grandmother, Khatoon Begum, was from Old Delhi’s Mohalla Churiwalan and a daughter of the scholar Khan Bahadur Maulvi Abdul Ahad . Her paternal grand-aunt, Khadeeja Begum, was married to the Shahi Imam of the Jama Masjid in Delhi, Ahmed Bukhari.