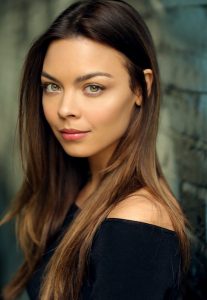 Scarlett Hannah Byrne is an English actress. She is best known for her roles as Pansy Parkinson in the Harry Potter series and as Lexi in the TV series Falling Skies. Byrne has also appeared in the TV series The Vampire Diaries as Nora Hildegard. Byrne began her acting career in 2005 in the short film CryBaby, before portraying Chloe Daniels in an episode of the British TV drama Doctors In 2009 Byrne got the role of Pansy Parkinson in the sixth film in the Harry Potter series, Harry Potter and the Half-Blood Prince, before reprising her role in the final two films of the series. Following the end of the Harry Potter series, she played Brittany in Lake Placid: The Final Chapter, as well as appearing in several short videos written by fellow Harry Potter actor Jessie Cave for her website Pindippy. During 2013 Byrne played the role of Sarah in the short film Lashes. She also played the role of Lisa in the action-thriller film Skybound, alongside Gavin Stenhouse. Byrne became a regular cast member for the fourth season of the sci-fi show Falling Skies. She moved to Vancouver for the filming of Falling Skies. While she departs the series at the end of season 4, Byrne reprises the role in the penultimate episode of the series, “Reunion”.