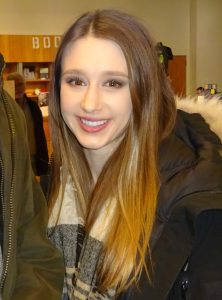 Taissa Farmiga is an American actress. She began her career in film in the drama Higher Ground, and subsequently made her television debut in the FX series American Horror Story: Murder House . Farmiga made her stage debut in the Off-Broadway revival of the drama play Buried Child . Farmiga has since appeared in The Bling Ring, Mindscape, At Middleton, The Final Girls, 6 Years, In a Valley of Violence, and Rules Don't Apply . She has voiced Raven in Justice League vs. Teen Titans and Teen Titans: The Judas Contract . Farmiga was born and raised in the Whitehouse Station area of Readington Township, New Jersey. She is the youngest of seven children born to Ukrainian American parents Lubomyra, a schoolteacher, and Michael Farmiga, a systems analyst. Her older siblings are Victor, Vera, Stephan, Nadia, Alexander, and Laryssa; the latter of whom was born with spina bifida. Farmiga's maternal grandparents, Nadia and Theodor Spas, met at a displaced persons camp in Karlsfeld during World War II. She attended public school until fourth grade, after which she began homeschooling. Farmiga has stated that she understands the Ukrainian language but can only partially speak it. She is proficient in American Sign Language, having taken classes for four years.