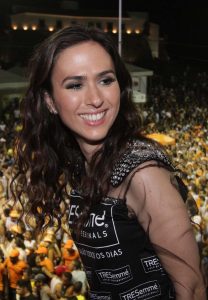 Talita Werneck Arguelhes best known as Tatá Werneck is a Brazilian actress, comedian, presenter, reporter, musician and former-VJ. Talita Werneck Arguelhes was born in Rio de Janeiro, Brazil. She is of Spanish and German descent. She began her acting studies with the age of 9, subsequently appeared in her first theatrical performance at 11. Her debut in a televised program occurred in 2008, when she joined the cast of Dilemas de Irene. Two years later, she joined the team of Quinta Categoria, the former MTV Brasil, and participated in several other station’s programs between 2010 and 2012. Tatá was only raised to fame in 2013, after obtaining the role of a comedic hoochie Valdirene who longed to marry a rich man in the soap opera Amor à Vida, transmitted by Rede Globo, the main television station from the country. Its performance achieved huge success and consecrated it as the revelation of the year almost unanimously in the press. Since then, the comedian starred channel programs Multishow, including the success of Vai Que Cola and the comedy Tudo pela Audiência, which she co-host with the comedian Fábio Porchat, as well as the television series I Love Paraisópolis, starring opposite to Bruna Marquezine. Currently, Werneck plays Fedora Abdalla in Haja Coração.