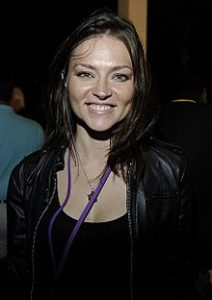 Trieste Kelly Dunn is an American actress, born in Provo, Utah. Dunn studied theater at the North Carolina School of the Arts, where she appeared in a number of student films, including those made by classmates and future collaborators Zach Clark, Brett Haley, Aaron Katz, and Brendan McFadden. Filmmaker Magazine named her one of the 25 New Faces of Independent in their 2010 Summer Issue, and the Los Angeles Times touted her as a “break out star” based on her roles in the upcoming independent films Cold Weather and The New Year. Dunn first rose to prominence on the FOX TV series Canterbury’s Law as Molly McConnell opposite Julianna Margulies. Her recent film roles have included critically lauded turns in Cold Weather, Vacation!, and United 93. She has also appeared on Fringe as Valerie Boone, the victim of a scientific experiment in the episode “Midnight”, and also guest starred on HBO’s Bored to Death. In 2014, she portrayed FBI Agent Elizabeth Ferrell on the TV series Believe concurrently with her co-starring role as Dep. Siobhan Kelly in Banshee. In late 2015, Dunn began a recurring role as U.S. Marshal Allison Knight, on the NBC drama Blindspot. In 2016, she is playing Natalie an event planner on Almost There, airing on Audience. Also in 2016, Dunn guest-starred in the second episode of the CBS legal drama Bull.