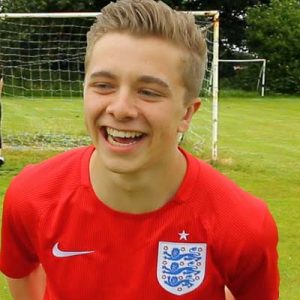 Chris Dixon is one of the most famous and trending YouTube star in the whole world right now. Chris Dixon was born on June 10, 1996, in Jersey, England. He was born as Christopher Michael Dixon, but best known as Chris Dixon.

He was born and raised in Jersey. He was a bright student in school. He has always had plenty of friends. He has a sister named Kelly. She has featured in his videos along with his cousins Jenny and Ollie, who Chris is very fond of. After he finished schooling he began uploading videos on YouTube. His parents were initially not keen on him giving so much of his time to YouTube as they thought that it wouldn’t be productive and it won’t make a good career. But once they saw the support he received from the audience and the scope it had, they gave him all the support he required. Chris loves his family; he is very close to his grandmother too!

On July 6, 2010, while still in high school, Chris Dixon launched his first and main channel. Cod: Black Ops – No Scope Montage | L96A1 is the first video he posted to his YouTube channel. The video was posted on February 5, 2011, and it has received 143K views to date.
The video was a gameplay video for “Call of Duty.” Furthermore, when he was much younger, he and his sister and cousins recorded three “Nerf War” gameplay videos but never uploaded them. And for every million subscribers Chris surpasses, he releases a segment from his childhood “Nerf War” video. Max, their dog, appears in the video as well.

He battled against Josh Zerker in a video called “FIFA 15 – The Draft | The Final vs Zerkaa.” FIFA gamer who publishes commentary videos to his popular channel Sirhcchris2010 later called ChrisMD. He also created a channel strictly for vlogging called chrismdixon10.

He also plays as a tackling midfielder, for a local football team at the Fortress. At the ‘Ultimate Sunday League Footballer’, he plays against popular YouTubers such as ‘Miniminter’ and ‘Manny’. In 2016, he also played in the ‘Charity Football Match’ for ‘Allstars’. He was credited as the best player in the tournament. Later that year in September, he played the ‘Wembley Cup’ against Spencer FC team and was awarded ‘Best Skill of the Match.’

He enjoys injecting a sense of levity into his work. He is a hard worker who has always believed in his ability to achieve his goals. Similarly, he has excellent montage skills, which he uses to amuse his followers and fans on his social media accounts.
He has also met and recorded football challenge videos with celebrities such as Cristiano Ronaldo, Kevin de Bruyne, Alexis Sanchez, Alex Iwobi, and Cesc Fàbregas.
Chris also has a second YouTube channel where he uploads vlogs, gaming videos, and other content. He is not nearly as active on his second YouTube channel as he is on his first.

Chris is breathtakingly cute and has won the hearts of many young ladies. He has a huge female fan following; he is charming and full of life. He loves adding humor to everything he does. He is also very hardworking and has always believed in following his dreams. He is grateful to his supporters for subscribing to his channel. He mentions that there aren’t as many people on the island where he lives yet he has a spectacular amount of fans. He has excellent montage skills too, which he uploads on his account to amuse his subscribers.

He is a huge football fan and he supports Arsenal. He says that it goes back a long way as his father too is a huge arsenal fan and he has grown up rooting for the team. He loves playing video games, and needless to say, his favorite game is FIFA. Apart from football, he can skillfully play tennis; in fact, he has won a championship in tennis. He also had an accident when practicing tennis, where the racket hit him just above his left eye and he had to be rushed to the hospital; he still has the scar. His favorite movie is ‘Lord of the Rings: Part III.’He had braces when he began uploading videos and was very conscious of them. His favorite TV show is ‘Sherlock’ and he is mad about chicken nuggets.

Chris Dixon is engaged to Shannon Langdon. On their respective social accounts, they post a lot of cute and adorable pictures of each other. In some of his YouTube videos, he also appears with his girlfriend. Fans adore and respect the couple. In terms of previous relationships, his first girlfriend was when he was in sixth grade. She, on the other hand, was more of a best friend. Aside from that, no information about his previous relationships is known.

Chris Dixon Net Worth And Salary

As of 2021, the estimated Chris Dixon’s net worth is $21 million USD. His net worth consists of earnings from post sponsorships and brand endorsements.

* He is from the United Kingdom.
* Chris Dixon’s birth name is Christopher Michael Dixon.
* Chris Dixon is more famous for his online nickname ChrisMD…
* ChrisMD has a sister named Kelly Dixon.
* He has shared photos of his girlfriend on Instagram.
* ChrisMd girlfriend’s name is Shannon Langdon.
* He joined the YouTube universe on July 6, 2010, and published his first video, his one and only Call of Duty video, in February of 2011.
* He also created a channel strictly for vlogging called chrismdixon10.
* FIFA gamer who publishes commentary videos to his popular channel Sirhcchris2010, later called ChrisMD.
* He battled against Josh Zerker in a video called “FIFA 15 – The Draft | The Final vs Zerkaa.”

Now he is ranked in the list of most popular British YouTuber.