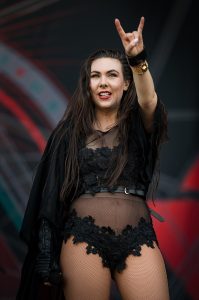 Hanna Elise Isabell Maj Höstblomma Ryd, known professionally as Elize Ryd, is a Swedish singer-songwriter, dancer, composer, and show artist, best known as one of the three vocalists in the melodic metalcore/power metal band Amaranthe. She also gained some popularity prior to the band’s inception by performing guest vocals for the symphonic power metal band Kamelot, both on tour and in the studio. She sings in the soprano range. Born Hanna Elise Isabell Maj Höstblomma Ryd, Ryd started out her singing career, after graduating from a three-year education at Performing Arts School, as a cabaret performer at the Cabaret Lorensberg in Gothenburg. She also did some chorus for different local bands such as Falconer. When she met Joacim “Jake E” Lundberg in a club in Gothenburg, he requested that she record vocals for a song with his band Dreamland, titled “Fade Away.” Jake E later introduced her to Olof Mörck, who proposed a collaboration with his band Dragonland to which she agreed. It was around this time that symphonic metal band Nightwish took interest in Ryd as a replacement for their previous singer Tarja Turunen, although she was ultimately not chosen for the role. She has stated in an interview that this was because she was a little too young, had a lack of experience and was unfamiliar with the industry. At the same time she, Mörck, and Lundberg talked about starting their own band with her as a lead singer and composer. The band was named Avalanche which was later renamed to Amaranthe for legal reasons.