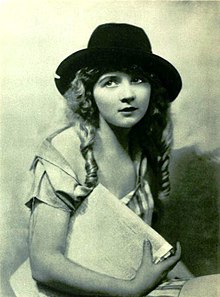 Gladys Leslie was an American actress in silent film, active in the 1910s and 1920s. Though less-remembered than superstars like Mary Pickford, she had a number of starring roles from 1917 to the early 1920s and was one of the young female stars of her day. Leslie began her movie career around 1915, acting in short films produced by the Edison Company. By 1917, she was making films with the Thanhouser Company in New Rochelle, New York, including The Vicar of Wakefield . The New York Herald’s review of that film dubbed her the “Girl With A Million Dollar Smile,” and caused studio head Edwin Thanhouser to decide she was ready for leading roles. Soon she was starring in the lead role in 1917’s An Amateur Orphan, but was quickly wooed over to Vitagraph Studios and starred in a number of Vitagraph releases in 1918 and 1919. Leslie and another young female Vitagraph star, Bessie Love, starred in numerous films in young girl-type roles that were popular at the time. Leslie’s similar appearance to Mary Pickford was also often noted.