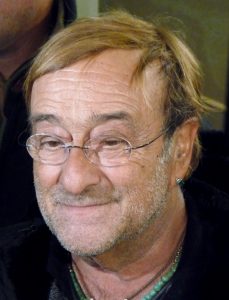 Lucio Dalla, OMRI was a popular Italian singer-songwriter, musician and actor. He also played clarinet and keyboards. Dalla was the composer of "Caruso", a song dedicated to emblematic Italian opera tenor Enrico Caruso. Dalla was born in Bologna, Italy. He began to play the clarinet at an early age, in a jazz band in Bologna, and became a member of a local jazz band called Rheno Dixieland Band, together with future film director Pupi Avati. Avati said that he decided to leave the band after feeling overwhelmed by Dalla's talent. He also acknowledged that his film, Ma quando arrivano le ragazze?, was inspired by his friendship with Dalla. In the 1960s the band participated in the first Jazz Festival at Antibes, France. The Rheno Dixieland Band won the first prize in the traditional jazz band category and was noticed by a Roman band called Second Roman New Orleans Jazz Band, with whom Dalla recorded his first record in 1961 and had the first contacts with RCA records, his future music publisher.