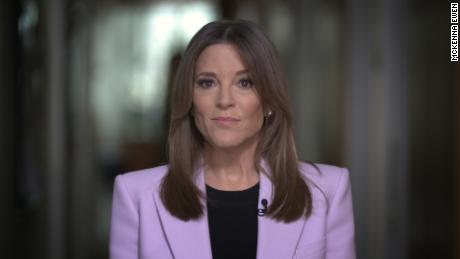 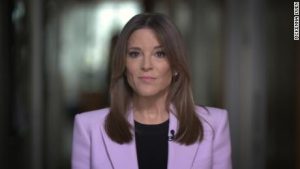 “A more loving life is a smarter life – smarter for our health and for the health of our planet. When it comes to International relations, if someone asks “What’s love got to do with it?” the answer is “Everything.” In study after study, the success rate of “soft powers” at dissolving international conflicts has proved greater than that of military might. Love is not a less sophisticated worldview; it is a more sophisticated worldview. There is nothing sophisticated at all about viewing security only in terms of bombs on land or sea, when the first bombs that go off are inside a person’s heart.” – A Politics of Love #marianne2020

She is the youngest of three children of Samuel "Sam" Williamson, an immigration lawyer, and Sophie Ann, a homemake. After living in California for many years, she relocated to her home state. He graduate from Houston's Bellaire High School. She spent two years studying theater and philosophy at Pomona College in Claremont, California. She dropped out of college her junior year and moved to New York City to pursue a career as a cabaret singer. She published her first book, A Return to Love: Reflections on the Principles of A Course in Miracles, in 1992.

She has written 13 books, including four New York Times number one bestsellers. She is the founder of Project Angel Food, a volunteer food delivery program that serves home-bound people with AIDS and other life-threatening illnesses. She is also the co-founder of The Peace Alliance, a nonprofit grassroots education and advocacy organization supporting peace-building projects.

In 2014, as an Independent, Williamson ran unsuccessfully for the seat of California's 33rd congressional district in the United States House of Representatives elections in California. On January 29, 2019, she announced her campaign to seek the Democratic nomination for the 2020 United States presidential election.

She has been a guest on television programs such as The Oprah Winfrey Show, Good Morning America, and Real Time with Bill Maher. In December 2006, a Newsweek magazine poll named her one of the 50 most influential baby boomers. She bases her teaching and writing on A Course in Miracles, a nonreligious self-study program of spiritual psychotherapy, based on universal spiritual themes.

On November 15, 2018, Williamson announced that she was forming an exploratory committee for a presidential run. On January 28, 2019, she formally declared her candidacy for the Democratic nomination.

He was briefly married. In 1990, she gave birth to a daughter, India Emma. She has more than 51k subscriber on YouTube, above 761k followers on Facebook, more than 381.2k followers on Instagram and above 2.61M followers on Twitter. Now she ranked in the list of most popular American author.