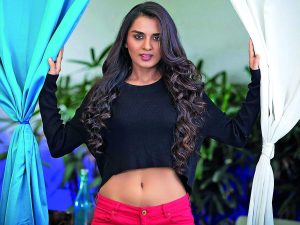 Sindhu, known by her stage name Sindhu Loknath, is an Indian film actress and model. She made her debut in films, with a cameo role in Parichaya . She is recognized for her performances in Lifeu Ishtene, Drama, Case No. 18/9 and Love in Mandya . Born as Sindhu on 5 February 1987 in Bangalore in the Indian state of Karnataka, Sindhu Loknath was born into what she calls “an extremely conservative family”. She obtained a Master of Science degree in Biotechnology from St. Joseph’s College of Arts & Science, Bangalore. She took to acting and made her debut appearing in a cameo role in the 2009 Kannada film Parichaya. Following her first screen appearance in Parichaya, Sindhu was cast as Nandini by director Pawan Kumar in his film Lifeu Ishtene, that released in 2011. Sindhu got recognized for her performance in the film. Around this time, she appeared in cameo roles in Telugu and Tamil films such as Allam Vellulli, Vaada Poda Nanbargal and Muppozhudhum Un Karpanaigal . In the 2012 comedy film Drama directed by Yogaraj Bhat, she was cast as Chandrika, a mute girl and the love interest of a character played by Sathish Ninasam. The film emerged as a success with its ensemble cast including Sindhu receiving critical praise. For her performance in the film she earned nominations for Filmfare Award for Best Supporting Actress – Kannada and SIIMA Award for Best Actress in a Supporting Role. In the same year, she appeared in Yaare Koogadali in a supporting role.