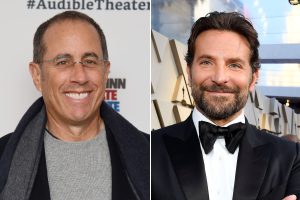 His mother, Gloria worked for the local NBC affiliate. His father, Charles Cooper worked as a stockbroker, who died in January 2011. He has an older sister, Holly. He graduated at the age of 18 in 1993 and attended the famous Germantown Academy in Philadelphia. In 1993, Bradley Cooper enrolled at Vilanova University to complete his Bachelors but later on, he switched to Georgetown University where he completed it there with honors in English.

He made his television debut with a part in Sex and the City in 1999. His cinematic debut came in the ensemble comedy Wet Hot American Summer (2001), a film that takes place at a fictional summer camp in 1981. He played Ben, a counselor and the love interest of Michael Ian Black's character. Although the film was critically and commercially unsuccessful, it has developed a cult status over the years. Cooper reprised the role in the film's prequel Wet Hot American Summer: First Day of Camp (2015), an eight-episode Netflix series. By the release of the movie ‘Wedding Crashers’. In this movie, he portrayed the character Sack Lodge.

In the television series Alias (2001–06), Cooper achieved some success with the role of Will Tippin, a local reporter for a newspaper and the best friend of Jennifer Garner's character, Sydney Bristow. He acted in the 2002 psychological thriller Changing Lanes. The scenes in which he appeared were edited out of the final cut of the film, but are featured on the film's DVD and Blu-ray releases. Also in 2002, he played a man involved in a love triangle in the romantic drama Bending All the Rules. He later appeared in the television film I Want to Marry Ryan Banks (2004) with Jason Priestley and as a regular guest star in the WB series Jack & Bobby (2004–05). Also in 2014, Cooper co-produced and starred as United States Navy SEAL sniper Chris Kyle in American Sniper—a biographical war drama directed by Clint Eastwood.

2012 was a highly productive year for him. He did his best in the critically acclaimed film “Sliver Linings Playback”, “The Words” and “The Place Beyond the Pines” which is known as a thriller.

A year later he played the role of an FBI agent in the multi starter mega budget film ‘American Hustle’ and it was for that role that he got nominated for the Best Supporting Role award. In 2014, Cooper starred in two of the most famous films in his career, namely, ‘Guardians of the Galaxy’ and ‘American Sniper’; the latter earning him yet another Academy Award nomination. Cooper directed his first film, A Star Is Born, a remake of the 1937 musical film of same name. Starring with Lady Gaga, Cooper played an established singer, Jackson Maine, whose romance with a woman named Ally (played by Gaga) becomes strained after her career begins to overshadow his.

He next reunited with Clint Eastwood in The Mule (2018), a crime film based on the life of World War II veteran Leo Sharp. He is set to return as Rocket in the Avengers: Endgame, which will be released in 2019, and Guardians of the Galaxy Vol. 3, the release date of which is unknown after the firing of James Gunn. He is nominated for an Academy Awards for his roles in Silver Linings Playbook, American Sniper, American Hustle and A Star is Born.