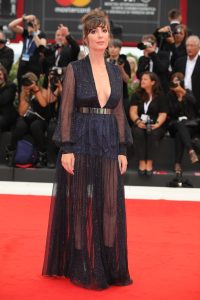 Nora Hamzawi is a French humorist, comedian, and columnist. Nora Hamzawi is of Syrian origin by her mother. She was born in Cannes and grew up in Paris. After obtaining a baccalauréat, she enrolled in law school but gave up after three weeks. She then enrolled at IUT Paris Descartes in Infocom and completed her training at CELSA, section “marketing, advertising and communication”. She follows in parallel with her studies Cours Florent and Atelier Fanny Vallon. She goes on stage in 2009 with her first one-woman show. She was revealed to the public the same year by the festival Just for Laughs from Nantes. She is also writer for the series Scènes de ménages on M6. She made a name for herself by appearing on Laurent Ruquier’s On n’demande qu’à en rire on France 2 between 15 September 2011 and 19 March 2012, before being eliminated by an insufficient rating from the viewers . Jean Benguigui said of her: “She does not know how to move, she does not know how to play, she does not even know how to wear a dress!”