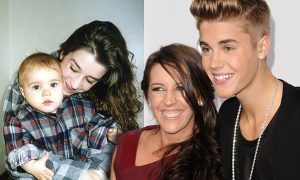 Patricia "Pattie" Mallette is a Canadian author, film producer, and mother of Justin Bieber, whose early career she also managed. Her autobiography, Nowhere but Up, was published in 2012 by Christian book publisher Revell, and was #17 on the New York Times Best Seller list during its first week of release. Pattie Mallette was born on April 2, 1975 in Stratford, Ontario, of French Canadian descent. She is a daughter of Diane M. and Michael Mallette. Her older sister was killed at age 5, when she was struck by a vehicle while crossing the street. She also has an older brother named Chris. Mallette has said her childhood was dominated by sexual abuse and violence and that she was first molested around age 3. Her offenders include a male babysitter, the grandfather of one of her friends, and neighborhood children reportedly mature beyond their years. Her book describes sexual abuse continuing until she was 14, followed by an incident of date rape at age 15. She says of the sexual abuse and violence, "I was sexually violated so many times that as the years went by it began to feel normal. It's a strange marriage – knowing something is wrong yet at the same time finding it familiar and commonplace."