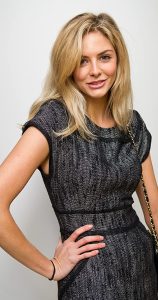 Tamsin Egerton is an English actress and model best known for her roles as Chelsea Parker in the 2007 film St Trinian's, Holly Goodfellow in the 2005 film Keeping Mum and Guinevere in the 2011 TV series Camelot. Egerton was born in Portsmouth, Hampshire, England. She started her acting career age six, following her older sister, Sophia, to a local youth theatre, saying, "The whole reason I'm acting now is because I wanted to be doing what my big sister was doing". A year later, she appeared in a Royal Shakespeare Company musical production of The Secret Garden, playing Mary. Egerton attended Ditcham Park School near Petersfield in Hampshire, where she says she was bullied. She also states she truanted, preferring to go to modelling shoots; "I played truant all the time. I was modelling so I'd go to shoots and call in sick." After finishing school at 16 with nine A-grade GCSEs, Egerton pursued acting rather than going to sixth form and then university, saying, "At drama school, they like to take you apart and rebuild you but I don't want to change now." She had a brief job as a babysitter for three children.